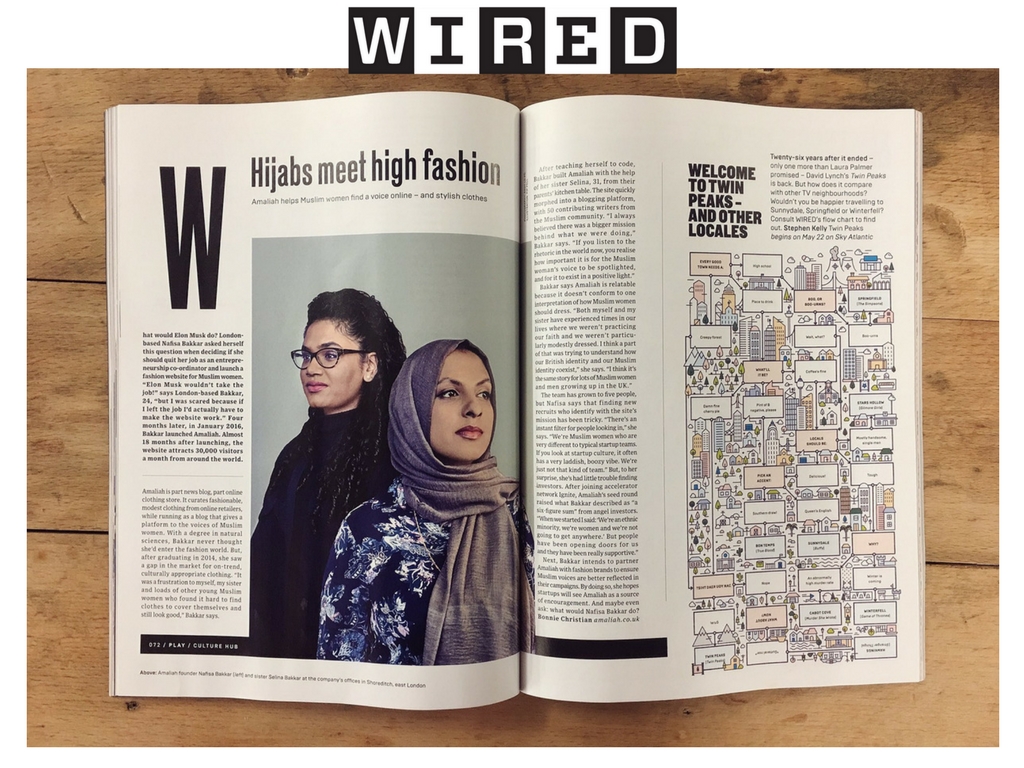 What would Elon Musk do? London-based Nafisa Bakkar asked herself this question when deciding if she should quit her job as an entrepreneurship co-ordinator and launch a fashion website for Muslim women. “Elon Musk wouldn’t take the job!” says London-based Bakkar, 24, “but I was scared because if I left the job I’d actually have to make the website work.” Four months later, in January 2016, Bakkar launched Amaliah. Almost 18 months after launching, the website attracts 30,000 visitors a month.

Amaliah is part news blog, part online clothing store. It curates fashionable, modest clothing from online retailers, while running as a blog that gives a platform to the voices of Muslim women. With a degree in natural sciences, Bakkar never thought she’d enter the fashion world. But, after graduating in 2014, she saw a gap in the market for on-trend, culturally appropriate clothing. “It was a frustration to myself, my sister and loads of other young Muslim women who found it hard to find clothes to cover themselves and still look good,” Bakkar says.

After teaching herself to code, Bakkar built Amaliah with the help of her sister Selina, 31, from their parents’ kitchen table. The site quickly morphed into a blogging platform, with 50 contributing writers from the Muslim community. “I always believed there was a bigger mission behind what we were doing,” Bakkar says. “If you listen to the rhetoric in the world now, you realise how important it is for the Muslim woman’s voice to be spotlighted, and for it to exist in a positive light.”

Bakkar says Amaliah is relatable because it doesn’t conform to one interpretation of how Muslim women should dress. “Both myself and my sister have experienced times in our lives where we weren’t practicing our faith and we weren’t particularly modestly dressed. I think a part of that was trying to understand how our British identity and our Muslim identity coexist,” she says. “I think it’s the same story for lots of Muslim women and men growing up in the UK.”

The team has grown to five people, but Nafisa says that finding new recruits who identify with the site’s mission has been tricky. “There’s an instant filter for people looking in,” she says. “We’re Muslim women who are very different to typical startup teams. If you look at startup culture, it often has a very laddish, boozy vibe. We’re just not that kind of team.” But, to her surprise, she’s had little trouble finding investors. After joining accelerator network Ignite, Amaliah’s seed round raised what Bakkar described as “a six-figure sum” from angel investors. “When we started I said: ‘We’re an ethnic minority, we’re women and we’re not going to get anywhere.’ But people have been opening doors for us and they have been really supportive.”

Next, Bakkar intends to partner Amaliah with fashion brands to ensure Muslim voices are better reflected in their campaigns. By doing so, she hopes startups will see Amaliah as a source of encouragement. And maybe even ask: what would Nafisa Bakkar do?