Eastern Leadership habits have never been popular because it is detached from democratic propaganda. But there was a time when people in the West would name their children Omar or Farouk because it was cool to do so. The Muslim world use to be a hotbed of innovation, knowledge and culture so everybody aspired to be like them, even the west.

Check out the video at the end of this article, it tells a story about the ONE habit that made Dubai the material success it is today.

Support our free content: We may earn sales commissions from products sold through these links.

And then the tables were turned, the Muslim world was in turmoil, helpless and at best taking their cues from the West in every single thing, politics, science and even life. The problem is not every square peg can be forcibly fit  into a round hole. You might want to take a look at why Western self– help doesn’t always work.

With the internet, knowledge is now democratized as everything is in the public domain. Disruptive technology has enabled almost anyone to compete with giants the same way David defeated Goliath.

We look to the West because we do not have any other model that is convincing enough to follow. Surprisingly there is a model in this day and age that can be used as a template for Muslims. And it is in the Middle East. All you have to do is read Tommy Weir’s book Leadership Dubai Style: The Habits to Achieve Remarkable Success. You can’t help wonder why didn’t you know about this Middle Eastern wisdom that I am about to share.

Tommy Weir makes a living by studying the habits of great leaders, and over the last decades, he has been studying the leaders of Dubai and their habits to find an answer to a single question. How did they transform Dubai from a barren desert into the 5th visited city in the world?

Dubai grew from nothing to one of the cities that has the fastest growth rate continuously for four decades. Dubai began as a port town in a desert environment with a population of approximately 4,000. Its economic achievement surpasses other runaway success economies such as Singapore and Hong Kong.

Dr. Weir attributed the success of Dubai to the leadership style of its rulers which he condensed into a few leadership habits. These habits can be replicated by any manager or those in a leadership position but it does require a considerable amount of courage. These habits will definitely challenge whatever you have learned about leadership, but it works.

Leadership,  need to lead with a long-term vision and keep their focus on the future. How far into the future? A generation ahead. Leaders should make decisions today for the next generation to have a better future. Dubai started Emirates Airlines in 1985 during the height of the Iran-Iraq war. In November 2001, two months after the September 11th tragedy, they ordered new airplanes worth well over $15 billion.

When everyone else in the airline industry w bootstrapping due to what appear to be an unprecedented downturn, they confidently invested into the future. Emirates Airlines is the only airline in the industry to obtain profits consecutively, now in its 27th year, with US$1.5 billion in 2015. This is possible because their focus was on the future, and they are not easily distracted by a crisis that hit the industry which is temporary in nature.

Leadership Lesson 2: Create An Environment For Others To Succeed

You can experience rapid growth if you can offer what others are not willing to offer. This is what happened to Dubai in 1901 when Dubai helped Arab traders in the region who were under pressure due to high taxes. Key merchants were invited to Dubai and do their trading there.

They were offered land and exempted from taxes. What Dubai did was offer a marketplace for traders to trade at low costs. So all the traders started to come and to trade in Dubai. Trade basically shifted from the neighboring region and moved to Dubai and their economy grew exponentially.

Leadership Lessons 3: Maximize A Bubble and Sprint Away From A Crisis

Great leadership knows that you can’t run away from a crisis. Remarkable leadership is about being able to survive during the uncertainty. Crises are a reality, so instead of working to avoid them at all costs, maximize the growth opportunities when they arise and minimize the post-crisis moments.

Crisis leadership is a sprint — into and out of crises. Dubai is so focused on growth that it undertakes mega projects like building the largest shopping mall in the Middle East. Being brave also requires standing firm even when it is against popular opinion. The Mall of the Emirates was criticized during its construction period by many who fail to see the vision. It is now silenced its critics by being the 7th most profitable mall in the world.

Leadership Lessons 4: The Courage To Be Ambitious

Those in leadership need to be ambitious enough to look beyond the current reality. The current reality is temporary, so leaders should not make their decision on a temporary factor. Exceptional leaders have an ambitious vision not for themselves but for others.

The habits or rather strategies outlined here are based on the tradition of selfless leadership. It is not for personal glory but for the best interest of the future generation. However, they are very relevant to current times where uncertainty seems to be a routine. But it really takes tremendous courage to do all the above. The type of courage that is difficult to muster, without the confidence that Allah is on your side. 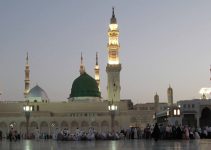